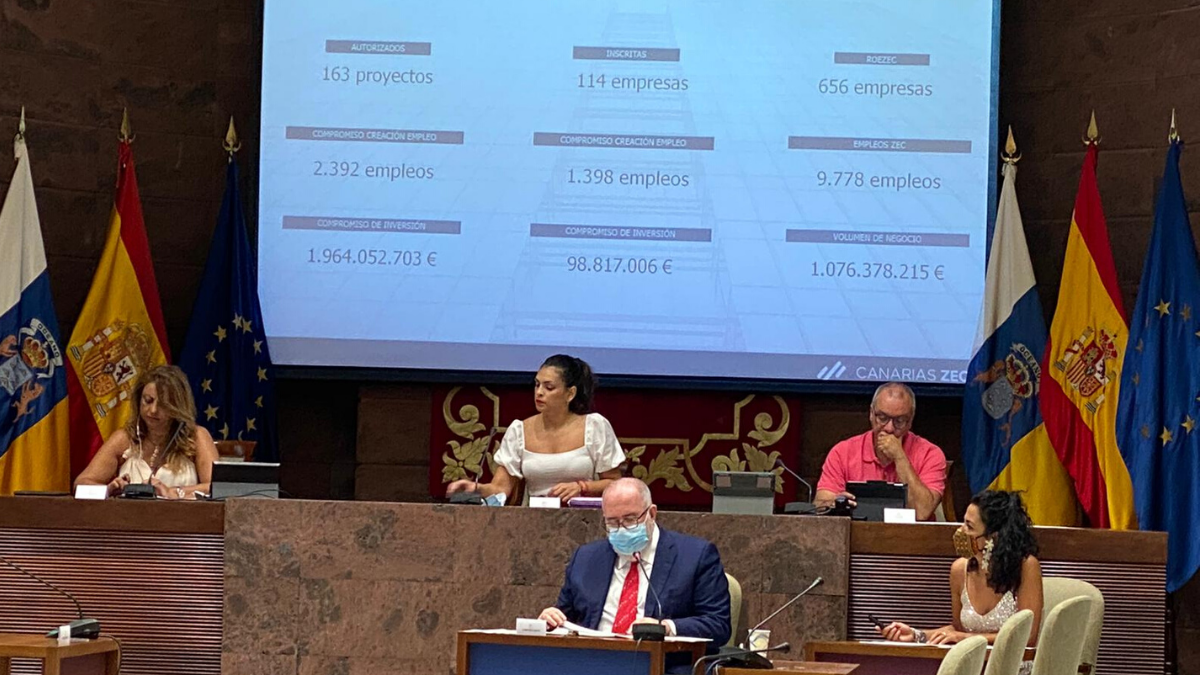 These statements were produced within the framework of Alfonso’s appearance before the Regional Chamber’s Economy, Knowledge and Employment Commission to present the data on the activity carried out and the results obtained during the current year and forecasts for 2020 referring to this instrument of economic policy, designed to attract international investment in strategic activity sectors to create value-added employment in the Canary Islands.

Within this framework, the acting president referred to the balance sheet contained in the report for last year, approved by the Governing Council of the ZEC, a document that contains the figures relating to the overall computation of the entity, which, among other aspects, details the evolution of registrations and authorizations between 2014-2019, the distribution by Islands, sectors and subsectors of activity, capital, the global balance of employment (with graphs referring to the distribution of companies by sections of workers and by sector of activity) , countries that invest in this regime and its efficiency as an instrument of economic policy.

In addition, during his presentation he highlighted the figures of the past year, influencing the annual computation of authorized projects and registered companies, with their respective figures of investment and employment commitments, capital, investing countries, sectors and subsectors of activity. During his appearance, he also carried out a comparison between the data recorded during the first semester of the current and the previous year.

The acting president of the ZEC stressed that diversification must be managed alongside the current structure of our business fabric and let the market put things in place and attract capital to prop up that traditional activity. “You have to open the Canary Islands to diversification, which has to be competitive so that it lasts over time. The problems we find when attracting investment to the Islands begin with the competition from other geographical areas, both legal and illegal, the rest, in open competition, we found an incentive to sell the benefits of the Islands as a whole ” , he specified.

For Alfonso, the ZEC needs a motivated team, incentives, commitment, prescribers, investment in foreign promotion, institutional synergy, guarantee the legal security of the European Union (EU) and provide economic incentives to a level as competitive as the fiscal one, protected in our status as Outermost Regions (RUP), especially for the attraction of audiovisual companies or Information and communication technologies (ICT), as well as legislation geared towards the sustainable development of the Canary Islands and employment with high added value.

Throughout his speech, Pedro Alfonso referred to the negotiation that must be opened to renegotiate the REF and within it, the ZEC as one of his incentives, to do it, he specified, “more competitive and to collect better possibilities for the Islands non-capital, this should be carried from the Canary Islands as a unanimous agreement of the society to which we must add the rest of the ORP (French and Portuguese) in an environment of the EU, where models of economic and social development are increasingly demanding ” . “Much remains to be done, however, we are already a global benchmark in legal areas with competitive taxation and significant incentives and maximum accumulation of aid,” he said. In addition, he pointed out that now the fruits of investment in promotion and legislative improvements are beginning to be harvested, although they should be valued as a starting point.

In his opinion, “the goal of a prosperous Canary Islands is still a long way off,” he argued. He also explained that when an investor arrives, the ZEC is advised in the same way, regardless of the destination of the investment. In this regard, Alfonso pointed out that, over the 20 years since its launch, the Governing Council has worked for an exquisite balance. “All the Canary Islands need to progress and we are committed to that,” he said.

Results of the first 20 years of the CanariasZEC: the best year of promotion in its history was last modified: August 7th, 2020 by ZEC