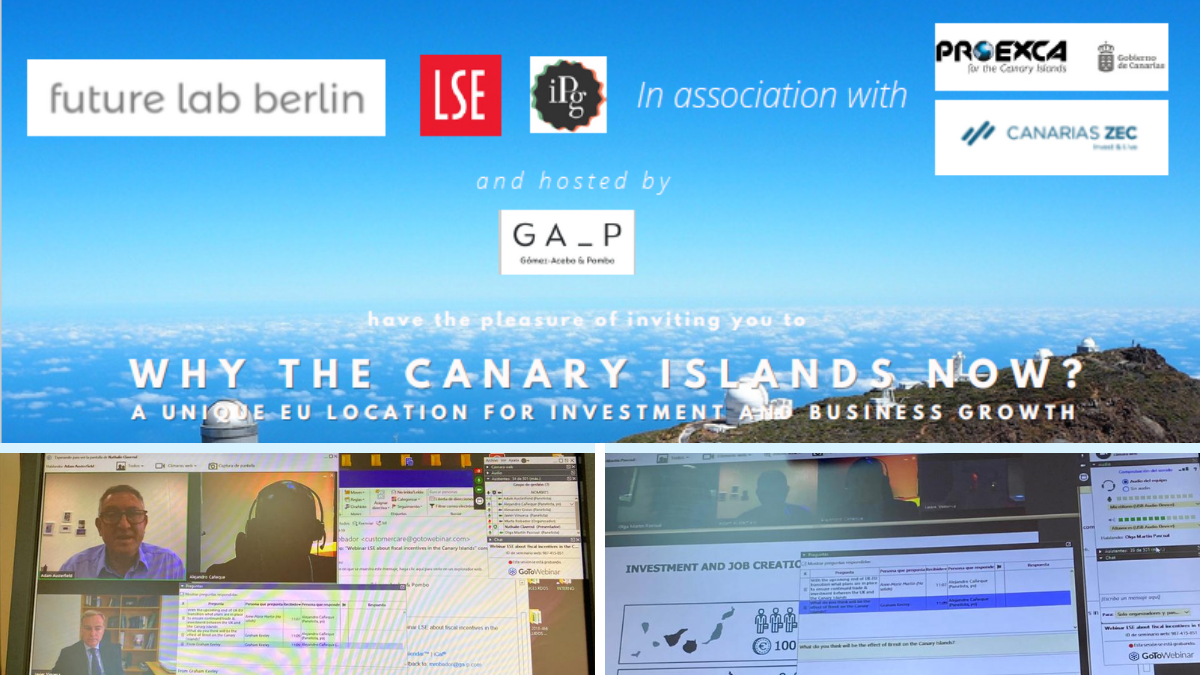 Canarias.- The Canary Islands Special Zone (ZEC) has organized today, Thursday, November 19, the webinar Why the Canary Islands now? A unique EU location for investment and business growth in collaboration with the London School of Economics & Political Science (LSE), a virtual investment forum focused on the British market where more than 45 companies have participated. For this, we have also had the advice of Future Lab Berlin; the international law firm, Gómez Acebo y Pombo (GAP) and the Canary Islands Society for Economic Promotion (Proexca).

The action responds to the strategy to attract international investment to the Canary Islands that encourages the development of activity driving sectors that diversify the regional economy in the heat of the fiscal differential of the ZEC, whose attractions are added to the geostrategic situation of the Islands with respect to the markets international, especially to West Africa from the safety of a European base.

The forum featured the intervention of the Deputy Minister of Economy and Internationalization of the Government of the Canary Islands, Almudena Estévez, who highlighted the important aspects of the Islands to invest and of the United Kingdom as an investment issuer. On behalf of the ZEC, the agency directors of Santa Cruz de Tenerife, Olga Martín, and of Las Palmas, Alejandro Cañeque, have participated. Martín outlined the Economic Regime (REF) of the Canary Islands and delved into one of its incentives, the ZEC, especially on issues related to its operation, procedure, procedures, requirements and advantages. In question time, Cañeque resolved issues related to ICT within the framework of the tax regime.

From his experience as a project advisory firm, Javier Vinuesa from GAP highlighted aspects such as legal certainty, the limited conflict with the tax authorities, in addition to fiscal optimization for some sectors such as audiovisual. Finally, the conference included representatives of the London School of Economics & Political Science, Alexander Grous, and of Future Lab Berlin, Adam Austerfield.

Regarding the British market, new opportunities are currently opening up, while the agreements between the United Kingdom and the European Union (EU) are finalized that will define their future interrelation when the transitional period of Brexit ends on December 31.

Along these lines, the aim is to attract investment projects from British companies that seek to maintain their activity within the Member States, in this case, taking advantage of the competitive advantages offered by the low tax rate of an economic policy tool that guarantees full legal certainty, fiscal transparency, distribution of dividends without withholding at source and the maximum accumulation of aid authorized by the EU, among its many attractions focused on business revitalization in sectors with little implantation, the regional Gross Domestic Product (GDP) and that generate high-value employment added.

CanariasZEC organizes a webinar in collaboration with the London School of Economics & Political Science aimed at the British market was last modified: November 20th, 2020 by ZEC